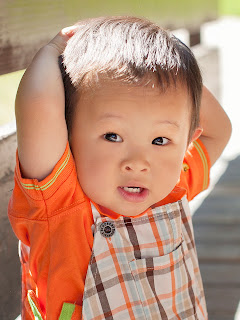 Our life changed forever four months ago today.  On June 18th we met a sweet, scared, tiny little boy that was in complete shock.  He is still just as sweet but today he isn't scared of anything!

We have done so much in the past four months.  Probably too much, but hindsight is always 20/20.  We had company at our house from the day we got home from China in early July until early September, save a few days here and there.  It was great to see everyone and watch Cooper get to know his new family; however, it has been so nice to get in our own routine.  We have done quite a bit of traveling in our short time home.


We were able to take Coop to see his first baseball game in Denver.  We were lucky enough to see our San Francisco Giants win! 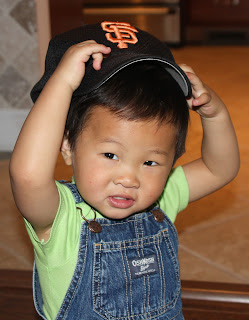 My Mom, sister Christy, niece Kayla and her husband Nick came for a week in late August to visit.  It was great for Cooper to be able to bond with them and for them to get to know the newest addition to the family.

In late September, we went to Jodee's (Ryan's sister), wedding in Pacific City, Oregon, for five days.  Ryan's entire family was there!  Aunts, uncles, cousins, grandparents, parents, and family friends.   We had such a wonderful time and Cooper loved being the hit of the show.  He was an absolute monster on the plane ride to Oregon, but was great on the ride home.


In early October, we drove to Omaha, Nebraska, to visit our niece, Kayla, and her husband Nick.  Nick is in the Air Force and they are stationed at Offut Air Force Base.  We enjoyed the nine hour car ride through eastern Colorado, Kansas and Nebraska, and Cooper gave us play-by-play as he watched the fields and animals along the way.  We were pleasantly surprised with Omaha - it turned out much different than expected.  We found some cool local restaurants, had some great meals, and had time to explore the Farmer's Market and the Omaha Zoo.  The zoo was amazing!  We also spent some time with friends who used to live in Colorado. They took us to a great pumpkin patch near Bellevue, Nebraska where we took some great "pumpkin photos" and Cooper experienced his first tractor ride.  We are definitely looking forward to visiting Omaha again.  Cooper loves his cousin, Kayla!  The ride home to Colorado was long and Cooper wasn't quiet for more than two minutes the whole NINE hours.  Not crying or whimpering, just giving his narrative from the back seat - his version of talking!  We thought that if we turned on a movie he might quiet down for a bit.  No - oh no, that made him so excited he screamed at the screen!  He is so very dramatic!

Last week we had an appointment at the Denver Children's Hospital with Cooper's surgeon.  The good news is that Cooper has put on five pounds and grown two full inches in four months.  He now is actually on a U.S. growth chart!  The doctor said he was pleasantly surprised at Cooper's progress and that he has done better than he ever expected.  That being said, Cooper is still not big enough for surgery.  The doctor was very frank with us and used phrases like, "this is a very big deal," and "this is a potentially life-threatening surgery."  We agreed that we should wait and decided that after tax season will be a good time to do the surgery - probably next May.  We found out more details on the recovery as well.  Cooper will be in the hospital for a minimum of two weeks and he will go straight from surgery to the intensive care unit (ICU), where he will be placed on a ventilator.  The surgeon explained that Cooper may need more than one surgery, depending on how much he can "close him up" during the first procedure.  Once he gets released from the hospital it will be a 10-12 week recovery at home.  We left the appointment scared to death but thankful that the doctor was so honest with us.  We now know what we are dealing with so we can at least try to prepare for May.
We have lots planned in the upcoming months.  Tomorrow Cooper gets to celebrate his Daddy's birthday and believe me we have so much to celebrate!  We are planning our annual trip Phoenix, Arizona for Thanksgiving to see Ryan's best friend, Ben, and his family.  This will be our fifth trip to Phoenix for Thanksgiving.  We can't wait for Cooper to meet them!  Two days ago Ryan emailed me from work and asked, "If you HAD to fly home from Hawaii, would you rather do it during the day or night?"  What??  Hawaii???  Ryan has a work meeting he has been asked to attend in Honolulu.  We did some research and discovered that we could get me a ticket using miles (China miles!) and Cooper will fly for free since he is still under two years old.  We will be staying at the Hale Koa on Waikiki.  It is the DoD hotel right on the beach!  I am so excited.  We have never been to Hawaii!

We have also started the process looking for daycare for Cooper during tax season (Jan-Apr).  We are weighing all the options and have found local, private places, and we are also considering using the child care on Peterson Air Force Base where Ryan works.  We have our first interview tonight.  We shall see what happens! 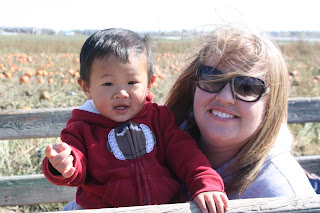 I ask myself on a daily basis, how did I get so lucky?  God is good.  That's the only answer!  He knew the perfect little boy our family needed.  He made us wait six years - a looooong time!  Nothing has ever been more worth the wait!  Thank you to everyone who has helped us along this journey.  Here's a little bit about Cooper you may not already know:


He loves to play in the dirt and rocks
He smiles all of the time
He has about 10 words - Baby, Papa, Bye, Dog (every animal is a dog), Mama, Dada, Uh-oh, Snack... and a few more when he makes them up.
He understands absolutely everything we say
He loves to eat
He makes us laugh
His favorite foods are broccoli, sweet potatoes, mac & cheese, pb & j, french fries, veggie fries, and apples


He climbs on everything
He loves the bath
He is sooo funny
His favorite toy is... our shoes!
and, he loves to eat!