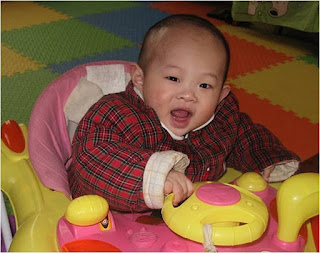 Monday, January 23rd marked the celebration of the Chinese New Year - 2012 is the year of the Dragon.

We recently received a quarterly update from Cooper's caretakers in China, and he has apparently been moved back into the orphanage.  Our agency speculates that the move was likely due to his match with us as his adoptive parents, as China normally reserves foster situations for children who haven't been matched.  We weren't happy to hear that he was moved once again, but we were extremely happy to learn that he is developing and growing.  And we were ecstatic to see a photo of him with a smile on his face!

Over the past three weeks, we have been meeting with our social worker to finalize our home-study, which is a prerequisite to submit our immigration documentation to the US Customs and Immigration Service (USCIS).  Our USCIS paperwork should (hopefully) get submitted sometime next week. The next step is fingerprints...

That's the update from here.  Happy New Year Cooper James!
Posted by Unknown at 7:00 AM