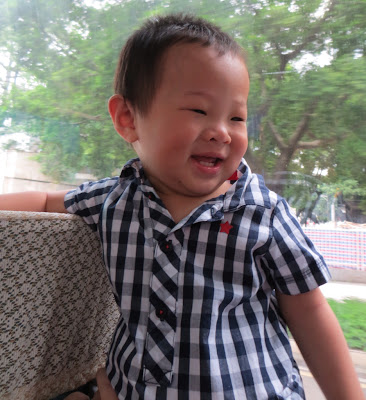 On the Bus to the Consulate!
Today was the day we've been waiting for for a really long time!!! Today we met with the consular officer and took the oath for Cooper to become an American citizen! We started the day with another breakfast at our hotel, and then met our group in the hotel lobby at 9:00 to board the bus for the US Consulate in Guangzhou. Everyone dressed up a little bit for the day, and lots of people wore their red, white, and blue for the occasion. Cooper, Ronda, and I wore our coordinating flag colors like everyone else. We took some photos in the hotel lobby and then got on the bus. 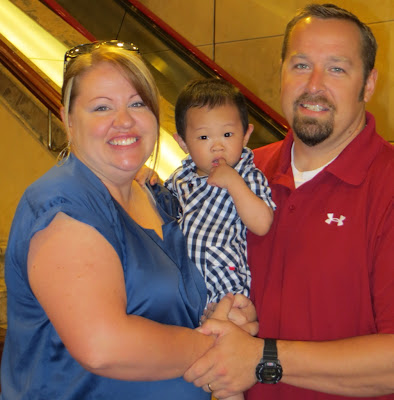 Ready for the Consulate Appointment!
We arrived at the consulate and bypassed the lines of people waiting to get their US visas in order to travel to the United States. We were led to the fourth floor, where we had to leave our strollers, cameras, phones, and iPads and go through a metal detector. Once past the security check, we were led into a waiting room where we found a few other couple who were also waiting to meet with the consular officer, but they weren't part of our group. Once we were all seated, a woman (from behind a bulletproof window) introduced herself and explained how the process would work. Then she administered the "oath," which turned out to be more of a promise that we hadn't lied about anything we put in our adoption paperwork, and less like a citizenship oath. Then they started calling names, and Ronda, Cooper, and I were the last ones called. We approached the counter, handed the lady behind the glass our paperwork, and after two minutes of pap shuffling, she gave us a few forms back and that was it. Not a lot excitement for this much fanfare. Then we followed our group back past security, got our phones and cameras, and went back to the lobby, where we took some pictures withe the consulate sign and the flag. We got back to the hotel by 11:30. The morning went quick. 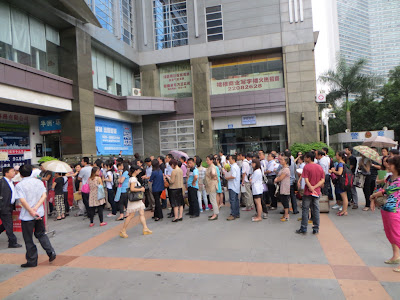 Lines to get US visas outside the Consulate 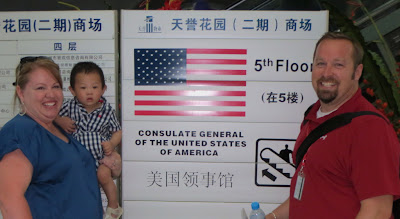 Appointment Complete!
We then decided to meet with some other families at the pool to hang out in the afternoon. We put Cooper down for a nap (Grizzy volunteered again to watch him) and got some quick takeout from Starbucks and McDonald's, and went to the hotel pool. We swam for about an hour, and then went back to the room and got Cooper and Grizzy and went back to the pool. Cooper loved the water. He swam, and swam, and swam!! He wore his new trunks that barely fit, and his little red swimming shirt to cover his belly. But he loved the pool. We stayed there for a couple more hours, just swimming and hanging out with our new friends. 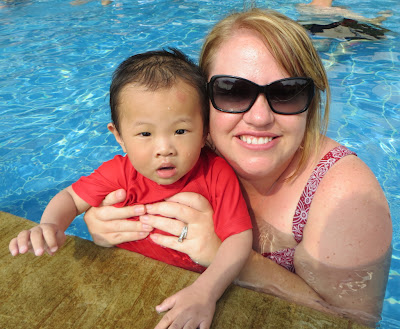 Ronda and Cooper at the Hotel Pool
We have really got to know some of the families really well, and we hope to stay in close contact once we part ways in a few days. It has been so awesome watching all of these kids get better and better acquainted with their parents and their surroundings over the past week. The difference from last week in all of these kids is night and day. It has been great to have other families that are going through the same sort of issues that we have, to talk to and bounce ideas back and forth, and we have really grown into one big family over the past 14 days!

We met our friends for dinner at a restaurant in our hotel called "Food Street" which is an attempt to capture Chinese street food favors in a large, loud restaurant setting. They got the large and loud part right, and it was a good thing that the restaurant was loud before we got there. We showed up with about 22 people for dinner and found two big tables in the back. We laughed, talked, and ate some Chinese food, and the kids were overall fairly happy in their kiddy seats. One of the couples ordered a Peking Duck for dinner. When they asked the waitress for the duck, she said that it came in two courses, and that would be too much for them to eat alone. So they agreed to only one course. When the duck came out, it looked spectacular, and they did a nice presentation. Then the waitress began to carve it and she only carved off the skin! That's the first course, just the skin. I guess the rest of the duck is the second course, and most people have it prepared in another dish once the skin has been removed. It was funny to watch, and the couple laughed about it, but I'm sure they went to McDonald's after the meal was over, because there was lots of leftover duck skin! 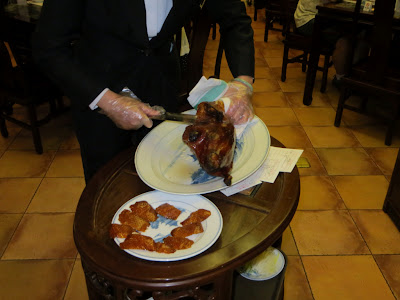 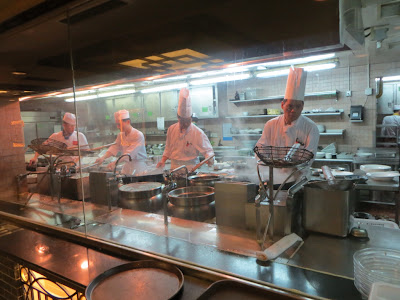 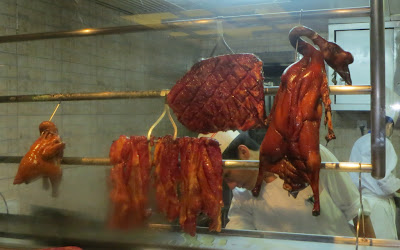 How Much is that Ducky in the Window?
We finished dinner and came back to the room, gave Cooper a bath, a bottle, and he went right to sleep. Very tired from a big day! I am so excited that he likes the water, and I can't wait to get him in the lake! Tomorrow we will take our group photo and then we are planning a trip to a fabric market for Grizzy. In the afternoon we will get Cooper's passport back with his US visa in it. Once we land in San Francisco, he will automatically become a US citizen, and we can apply for his new, blue US passport. We will leave Guangzhou on Saturday morning in a bus destined for Hong Kong. Our trip is nearing its end, but we have a few more exciting days ahead of us!
Until next time, Ryan. 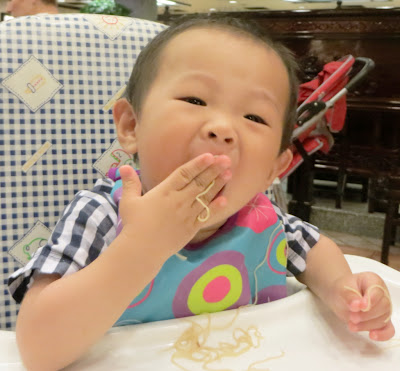