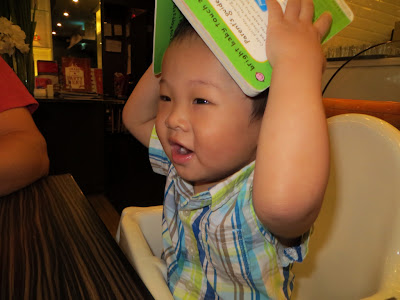 Cooper enjoying his book at dinner
This morning we had our last breakfast in China at our hotel in Guangzhou and at 10:00, along with three other families, we boarded a van for Hong Kong. HK is a part of China but it is a special Economic Zone with its own legal system, currency, and the people of HK have their own passports. We had to go through the China border and show all of our documents and then a few yards later we had to go through the HK border and show all our documents again. Th border crossing took about 30 minutes and the entire trip was about two and a half hours. The vans were very nice and the air conditioning was excellent. They drive on the "other" side of the road in Hong Kong, so the van driver was on the right side of the van. It took some getting used to, and then all of a sudden, I looked up and we were on the wrong side of the road. I missed the crossover, and I've always wondered how that works. Ronda and I are both excited to he back to the US where we have car seats! Cooper sat on our laps, and took a nap in the baby carrier on Ronda's chest in the back of the van. A car seat would have been much easier, not to mention safer. 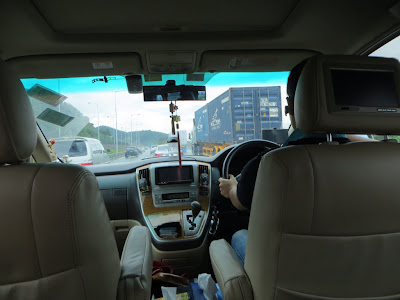 Ummm, wrong side?
We arrived at our hotel in Hong Kong around 1:00 and checked in. We had to change some money, because they use the Hong Kong Dollar and not the Chinese Yuan. I had some Chinese money left, so I tried to change it, but they only accept 50's and 100's. I only had one 100 and a bunch of 10's and 5's. So I was stuck with 80¥. Then I realized it's not that big of a deal since its only about 12 US dollars. Since we arrived before check-in, some of our group's rooms weren't ready yet. They gave the bellman their check-in luggage and brought their carry-ons to our room. Then three of the families, including ourselves, decided to take the hotel shuttle to the local shopping area recommended by the concierge. 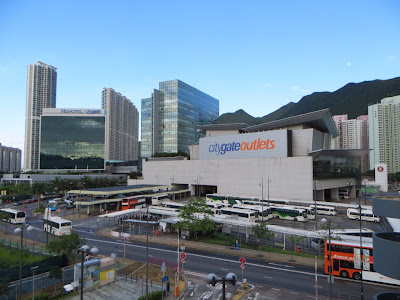 Outlet shopping near the hotel
We are staying at the Marriott next to the airport. While it is going to be very easy to catch our flight on Monday morning, it really isn't that close to much else. So I was a little skeptical about what we were going to find at this "shopping area." Much to my surprise it was a huge outlet mall with a gondola and several stores we actually recognized. We settled on a Spaghetti restaurant for dinner, and got a table right as a huge storm was blowing in lots of rain. The food was very good, and everyone was excited about finding a place to eat that they really enjoyed! 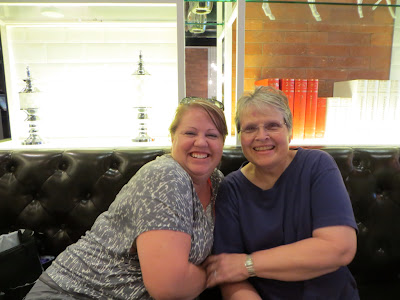 Ronda and Grizzy at dinner
After dinner, we split up and two of the families (yes, us) decided to take the gondola. Ronda had read about a huge Buddha statue in Hong Kong and we saw some photos of the statue around th shopping mall. So, after some conversing with the gondola operators and ticket salespeople, we figured out that the gondola actually takes you over the bay and to the island where the Buddha statue is located. 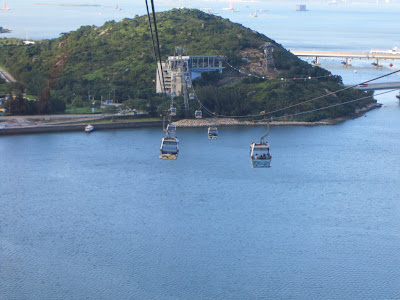 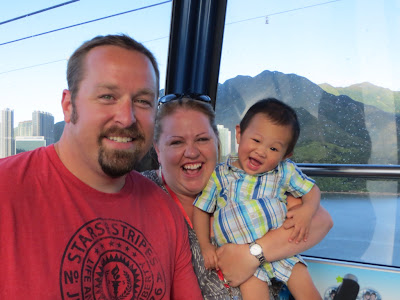 Family photo on the gondola
It was still windy and a little rainy when we boarded the gondola, but halfway over the bay and up the mountain, the clouds cleared and blue sky appeared. It was really beautiful aand the sights were breathtaking! After about 20 minutes, we finally sighted the huge statue. It was so cool. We arrived at the end of the gondola about five minutes later and started walking towards the statue. The statue was closed and the last gondola left about 45 minutes after we got there, so we hurried to see as much as we could during our short time. It was one of the coolest things we have done on the trip so far! It is a Buddhist monastery and temple, and there are brahma bulls walking around, and sleeping dogs all over. Cooper really liked the animals. Since it is at the top of a mountain on the coast, the wind was whipping, and the flags were really flapping. We saw as much as we could, and then got back on the gondola. We got back to the bottom and took the hotel shuttle back to the airport hotel. 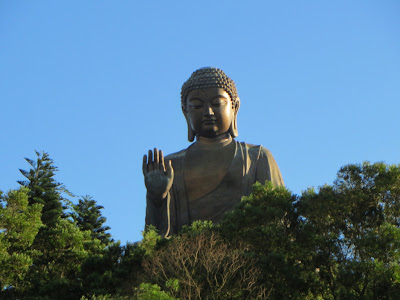 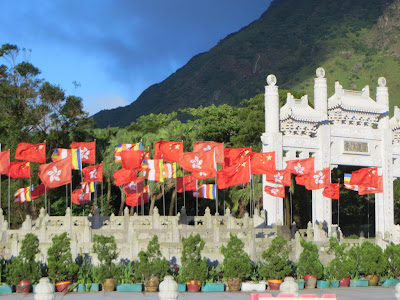 The flags we really flapping! 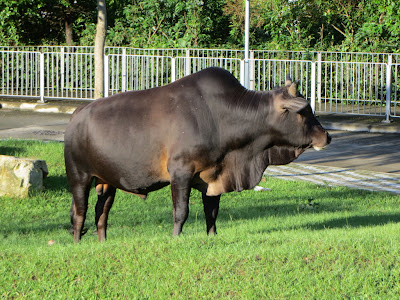 Bull lounge
We have one full day left here and we plan to make it count. We are planning to go to the Stanley Market tomorrow as well as a popular Asian garden in the center of Hong Kong. We may even attempt the metro! We leave here on Monday morning at 11:00. One more day and we are going to make it count!

Until next time, Ryan.