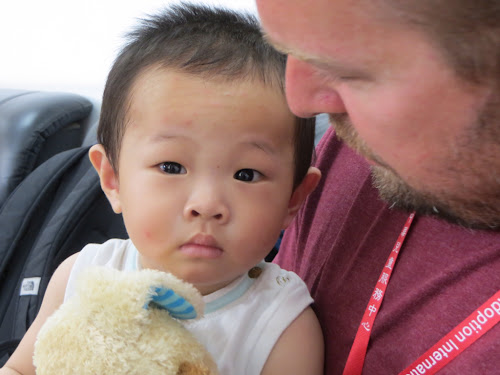 We left the hotel for a 20 minute bus ride to the government office where all the children were going to be dropped off. We got there and went inside. Not 2 minutes later a car drove up and someone yelled "CAR!" we went to the door and 3 ladies got out of a car with 2 little boys. Ryan said it was him but I wasn't sure. But it was! He was first in the building! The Orphanage Director handed him to me. It all happened so fast. It was wonderful. I held him for a minute then passed him to Ryan. He just kept staring at us. We got the whole thing on video thanks to another parent in our group.

We stayed at the office for maybe an hour and a half. We had to sign some paperwork for guardianship for the next 24 hours. We have that long to decide if we want to adopt him or not. I don't need 24 hours. I didn't need 2 seconds. He is a keeper. He is so little and so perfect. We have not seen any tears yet. I know they will come. He has some sort of respiratory thing going on. The ladies from his orphanage said he got sick yesterday but the way his lungs sound I think he has had it for at least a few days. He is very small except for his tummy due to his special need. He is so beautiful. I know I shouldn't call a boy beautiful but that is the only word I can think of right now. 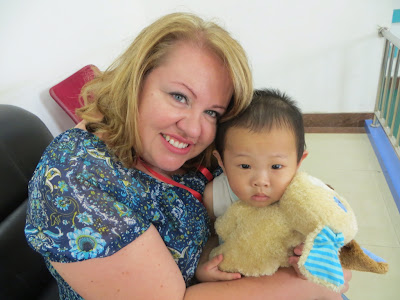 We took the bus back to our hotel with 8 new babies. I held him on my lap and he snuggled in and fell asleep. At the hotel he had some yummy baby food carrots and a bottle. Daddy changed his very first diaper ever and did a great job. We were able to Skype with my brother and his family plus my mom and sister. Before we knew it we had tons of smiles! Now he is in his crib for a nap. See what I mean when I say the day has been perfect so far? Also, even though it is Monday here in China it is still Sunday in the US. So we actually got him on Father's Day. Happy first Father's Day Ryan!~Ronda 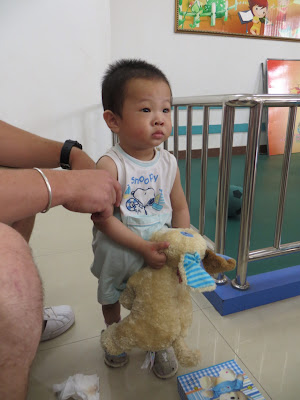 Not Sure What to Think of These People 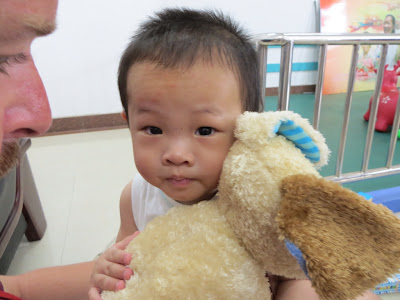 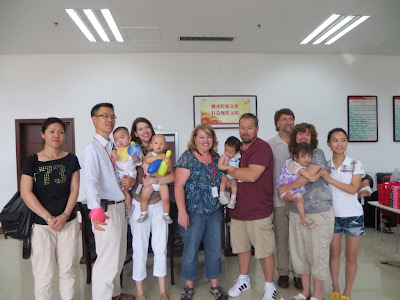 All the Families with Their New Little Ones from Kaifeng Orphanage
Posted by ronda at 11:44 PM