Today we went to Cooper's orphanage in Keifeng. We left the hotel around 9:30 in a contracted van with our escort/translator, Vivian. The city of Keifeng is about an hour east of Zhengzhou, and it took us about 90 minutes to reach the orphanage. On our way, we passed several huge construction projects. There are so many new projects here in Henan Province, and none of them are what I would call "small scale," they are all several skyscrapers in a group with shops and parking lots below. So much construction. We learned that there are 9 million people in Zhengzhou.

When we turned off the main interstate onto a dirt road, neither of us knew what to think. We were immediately surrounded by a rural setting - rickshaws and bicycles towing and hauling goods and people everywhere. At the end of the road, we pulled onto a concrete driveway where a young woman was waiting for us. We later figured out that she was the orphanage administrator - the same woman who had handed us Cooper three days ago at the Registration Office in Zhengzhou. She escorted our little group into the orphanage area. It was not what I had thought it would be. It was a small courtyard with plants, some grass, and steps to each room, with bamboo curtains hanging over each doorway. Once we got into the courtyard, the two young girls who we had met in Zhengzhou also greeted us and immediately started kissing and playing with Cooper. He loved them.

The rooms were marked with a plackard at each doorway, and we were led into room number 3. Once we stepped through the bamboo curtain, we instantly knew exactly where we were. It was the same place that had been the backdrop to every photo and video of Cooper that we had ever seen. The floor was covered in a pink and green playroom foam puzzle, and the cribs were lined against the wall. Most of the cribs had smaller babies in them. The orphanage administrator went and found Cooper's nanny and she came out from the kitchen and gave a huge smile when she saw Cooper. He started yelling and kicking (I had him in the baby bjorn on my chest) and was reaching for her. She asked me to take him out of the holder and she took him from me and made a bottle and started feeding him right there! It was awkward, but it seemed like the right thing to do. As that was happening, more girls arrived and they were all whispering and smiling, saying "Aihu" - Cooper's Chinese name. They all loved him very much. That part was very obvious.

We went back to looking at the babies in the cribs. The Keifeng orphanage takes care of hundreds of kids, almost all of which are special needs. And we learned today that most are in foster families. Most of the babies we saw in Cooper's room were either missing a limb, or had cleft palate or cleft lip. We wanted to take all of them home. Also in Cooper's room was a friend of his (they said the two were best friends) that is also being adopted from a family we believe who is from Colorado. Cooper recognized him immediately and the girls made sure they exchanged several kisses and hugs. It was pretty cute to see. We saw the play room and the kitchen area, and they showed us his crib. His was next to his nanny's bed - another sign that he was one of her favorites. The nannies live in the rooms with the children. We bid the nanny an emotional goodbye, and thanked her again for raising our son to be so sweet. We are so lucky!

After about 45 minutes it was time to go. We said goodbye about four different times to our entourage of girls. Once in the office, once outside the office, another at the front gate, and finally after they followed us to the car, some of them began to cry as we left. We could tell that we had done the right thing to come here and meet these wonderful girls who cared for him so much. Once we were in the van, Cooper waved to them and watched them disappear. Then he turned to us and gave us both a kiss. Pretty cool. He's a keeper.

The ride home was uneventful and we got back to the hotel about 12:30. We are so happy that we chose to visit the orphanage, and we continue to consider ourselves the luckiest people on the planet to have been blessed with Cooper. Now we know the rest of his story.

This afternoon we ordered pizza from room service and went over our final documents that just came back from the notary's office. We are planning to go to the park this evening for a walk with the rest of the families. Tomorrow is Dragon Boat Festival, which doesn't mean much more than the fact that it is a national holiday, and all the offices will be closed. So one last day in the hotel before we leave Zhengzhou for Guangzhou on Saturday.

What a great day. Ryan. 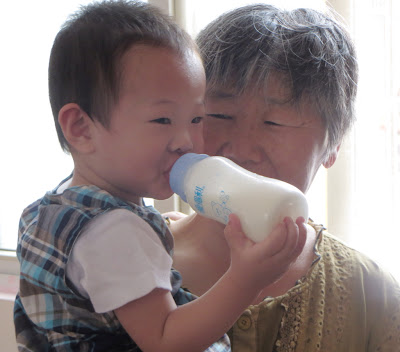 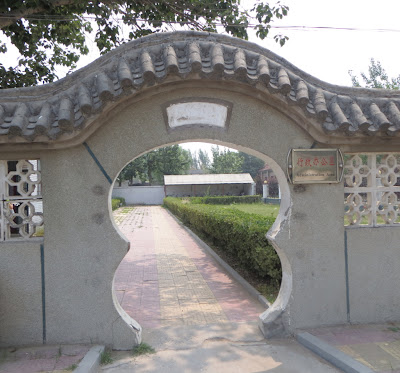 Entrance to the Orphanage 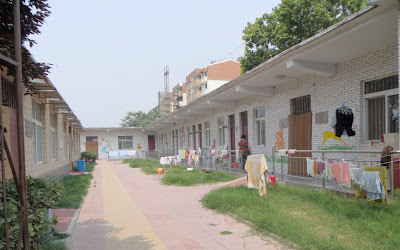 Courtyard in the Orphanage 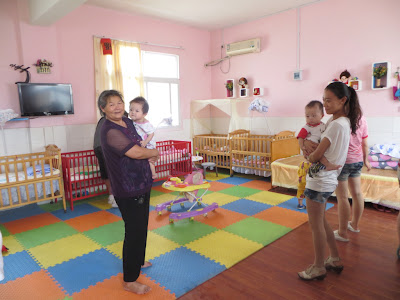 Cooper's Room at the Orphanage 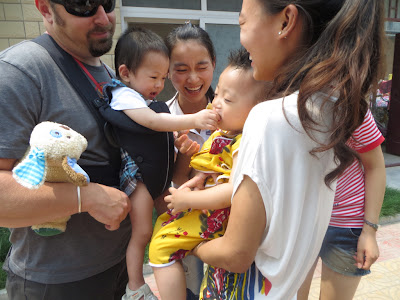 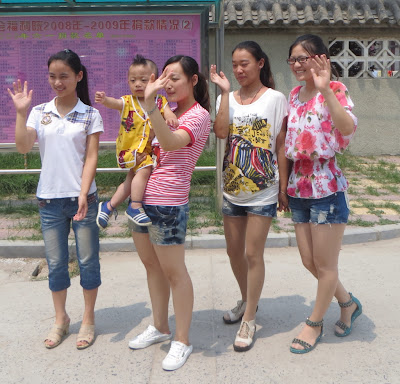 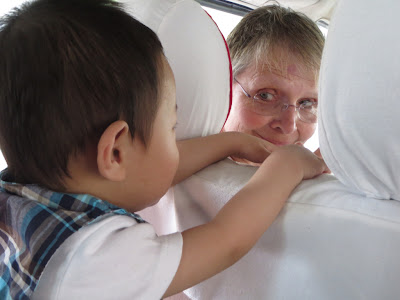