Today started with another great hotel breakfast. Since we didn't have any formal appointments today, our reps planned a morning of tours for us. So we spent the morning with several of the families in our group, and a couple new families that joined our group here in Guangzhou. They picked their adopted kids up in other provinces, and have joined us here to do the US Consulate appointments together this week. Some people have asked where in China we are, so here's a map for reference (we are the blue dot)! 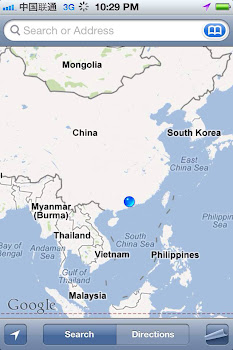 We boarded the bus at 9:20 in the rain and headed to the Buddhist Temple. It was really amazing to see. There were at least four separate prayer rooms with big statues in each, and the main one had three statues in it that were huge! It rained the entire time, so we sort of spent our time moving from cover to cover, and we really didn't get to enjoy each one as much as we would have liked. At one of the smaller temples, they had brought in several coolers with fish in them. The fish were going to be blessed and then let go in the river later today. Pretty cool. 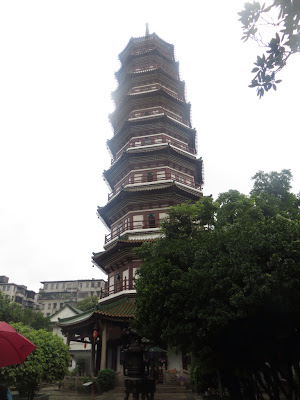 The Pagoda at the Buddhist Temple 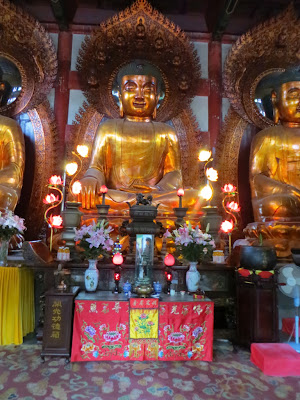 Inside the Main Hall 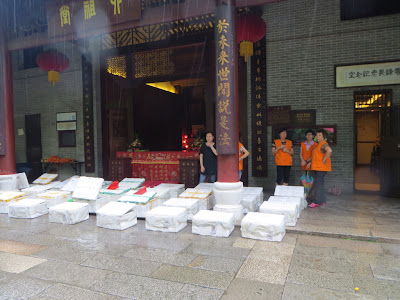 Coolers of Fish Ready for the Blessing!
Next we went to the Chen Family House. It is a very cool place that was built by the Chen family in the late 1800s as an academy for their family to study the family history. It now doubles as the Guangzhou Folk Art Museum. The entire place has several buildings with very ornate decorations and rooftop carvings. It is obvious that this place took a long time to build. The doors are all carved wood stories and the rooftops are covered with statues that also tell stories. We shopped at the stores and found lots of stuff that we couldn't live without. While we were at the Chen House, the rain stopped and the sun poked its head out. I'm not sure what's worse... 90-degree heat with rain, or 90-degree heat with 95% humidity. We ducked from room to room enjoying the air conditioning and fans, but the bus was the only place we got real relief from the ridiculous climate here. 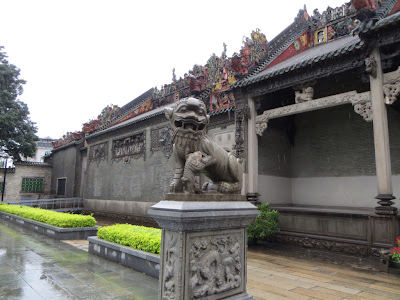 One of the Lions Outside the Chen House 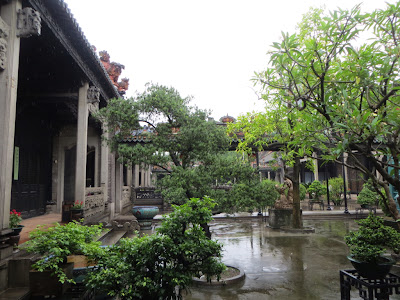 Inside the Chen House
The last place we visited was the arts and crafts bazaar. It was another government-guaranteed place that our guides found, but in our opinions, the prices were nearly double what they were at other places. Grizzy bought a refridgerator magnet. Once good thing, while we were there, we visited a local shop across the street and bought some diapers at about half price we have seen at other places. We got back to the hotel around 12:30 and picked up McDonald's for lunch (it's right next to our hotel).
After lunch, Ronda and I left Cooper napping with Grizzy and we went with a few other families to a big new shopping center. The main reason for the trip was for some of the other families to pick up some items like formula and diapers at the Walmart, but we also found a few toys and enjoyed a Starbucks coffee treat. We also visited the local Apple Store and walked the halls of the mall. It was a familiar layout, but we didn't recognize any of the store names. 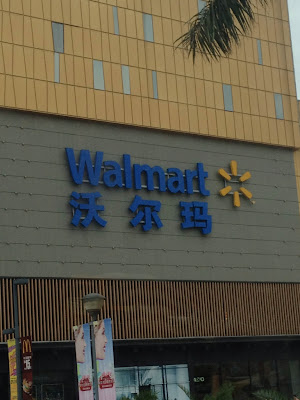 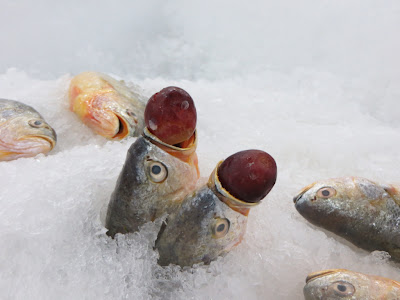 Fish for sale at Walmart
We got back to the hotel around 4:45, got Grizzy and Cooper, and met the rest of the group for an organized dinner at a local restaurant called Macau. Our guides ordered for us and we really enjoyed the food and the company. Ronda's favorite was the Curry Chicken and I really liked the Pan Fried Noodles. Cooper ate everything that we fed him. 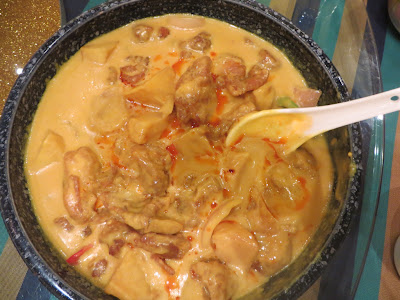 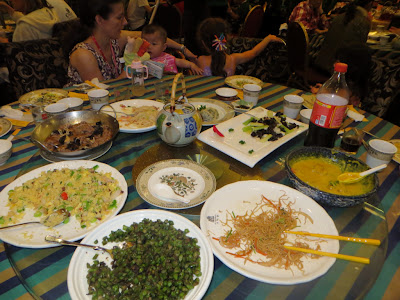 Our table at dinner
One cool thing about tonight - we realized that Cooper really needs his exercise! We walked with him the entire way to the restaurant and back, which was almost two city blocks one way! He sings and squawks the entire time, but very much enjoys walking. He still does need someone to hold his hand because with his tummy it makes his balance a little off. When we got back to the hotel, we went to the garden area that has a playground and a foam floor. Cooper ran around and bounced up and down. He even did the swing and the slide! He does love to play, that was today's lesson. Tomorrow we have our physical appointment and we are taking a Pearl River Cruise in the evening. Should be fun! 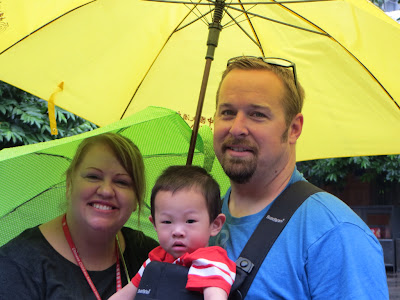